The only thing of real importance that leaders do is to create and manage culture. If you do not manage culture, it manages you, and you may not even be aware of the extent to which this is happening.

Staying ahead of the game and delivering a mind-blowing customer experience every time requires a flexible, agile and resilient dynamic within a specific team or throughout the organisation.   All too often the dynamics at play are destructive, stifling performance, suffocating innovation and creating conflict and tension. To change these dynamics is relatively simple with insight, awareness, robust conversation and dialogue.

My interactive Team Thinking Masterclass (Workshop) is designed to assist your team to get to the heart of how the organisation and/or team functions and behaves. Using a rigorous facilitated diagnostic process, the intervention identifies the obvious, and not so obvious, habitual dynamics at play in the environment in an insightful, practical and non-threatening way.

With a focus on interaction, robust conversation and dialogue, the process is designed to:

Human change and transformation always takes place in a context and the context cannot be divorced from the way in which people operate or the way that change unfolds. We are not individuals going about our daily routines in isolation, but are shaped by the world and systems we are immersed in. In an organisational sense, we refer to this context as culture.

Creating culture is relatively simple. All you have to do is put a group of people together and wait. In no time at all they will develop patterns of behaviour and relating and hey presto, a culture is born. People who come into the group at later stage will tend to take on the culture of the group and so a culture can persist long after the original members of the group have departed.

This is alright for a while until it comes time to doing things a little differently, (which let’s face it, is almost every minute of the day in our current times). And that’s where leaders are faced with resistance. The typical response to this resistance is to ‘spice things up’ through a series of outside-in change management techniques to support the direction that the organisation wishes to take.  However, as many leaders discover, the challenge is not simply about introducing a new ‘bolt-on’ way of operating; it involves overcoming entrenched, systemic and habitual ways of thinking and behaving which create an incredible inertia across the system.

Although there are many definitions of organisation culture that have been put forward by management theorists over time which generally speak to the psychology, attitudes, experiences, beliefs and values of an organisation, my perspective is simply this:

An organisation is simply a network of conversations and relationships.

Think about this for a moment: Whilst an organisation has strategies, goals, systems, processes, policies and machinery, they are all designed, and operated, by people.   Whatever an organisation’s vision or purpose may be, nothing gets done in any situation without a conversation, either verbally or in writing between individuals. The quality of the conversation impacts on the quality of the relationship and ultimately creates patterns of thinking, emoting and behaving which either enhance or exacerbate performance. Given that people generally don’t spend a great deal of time, if any, reflecting on how they think and feel, particularly in an organisational context, these patterns are typically habitual.

Let’s put this into context. “Why did you do that?” is a commonly heard question. Although it seems innocuous enough in itself, this question presupposes that the behaviour in question was intentional. Is this a valid assumption to make? The short answer is no it isn’t.  Most of our behaviour is habitual and is born of instinct and experience. Rather than acting with deliberate intent we act to take care of our deepest concerns such as safety, status, certainty, approval and control. When we take care of our concerns we are attracted to those situations that will enhance what is important to us and defend ourselves from those which we assess may harm us. Without intervention our habitual responses to a given situation will simply play out time and again. Anger will lead to an aggressive response; fear will lead us to avoidance and so on.

These habitual ways of behaving are one of the key linchpins of culture. If we want to evolve a culture, it is not enough to be exposed to a series of techniques for behaviour improvement; we have to go through a process of conscious habit creation. The key to building new habits is to identify what they might be and then find ways of creating awareness – choice points – when old habits might kick in such that we can choose a different path. If a habit building process is linked and aligned with a process of building a cultural narrative, then there is a real chance for a cultural evolution.

Understanding how we create these habits is critical if developing a context for performance and a deliberate high performing culture is going to work. A shift in culture is a process of creating new habits of thinking and acting within the group

Human beings, by nature, use emotions and language to develop interpretations about what is happening, so they can make sense of their world. They then share some of their interpretations with others. These interpretations often take the form of ‘stories’ and ‘narratives’ and organisations are full of them.

We use these stories to determine what is going to be good or bad for the future, both long term and short term, and to make decisions as to what action to take, or not take in any given situation. Those stories ultimately become the unwritten rules of the organisation and ‘the way we do things around here’.

Of course, how these stories came into existence is often long forgotten but they continue to manifest as a pattern of action and behaviour that we experience as culture. The creation of a new culture is fundamentally about the creation of new stories and habits that are aligned with how a community wants to relate to each other. Understanding the habitual ways of behaving and the stories across the organisation is critical as a first step in constructing and intentional culture.

Originally developed by Professors Kim Cameron and Robert Quin, the competing values framework is a powerful tool in the analysis and pragmatic discussion around culture and team dynamics unpacking the stories held by the organisation together with their impact on others and the entire customer experience.

The competing values framework joints all the dots by connecting the different aspects of organisational and team value together. The process looks at individual and leadership behaviour and how those specific types of behaviour and ways of relating produce specific types of culture, and competency. It also looks at how those organisational competencies, produce very specific types of value together with the cause and effect relationship they have in a business context. It identifies how people communicate, relate to each other, and relate to leadership, the environment, stakeholders and customers. 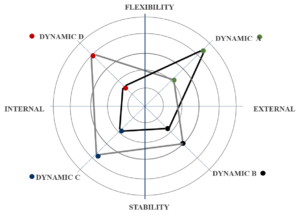 The competing values framework looks at the opposing ‘tensions’ in an organisation or team. This then creates four cultural profile types which happen at an individual level, an organisational level and an outcome level.  An assessment is designed to pin point where the organisation or team is now, together with the cultural challenges being faced. It looks at where and how authority and trust is held within the business and the impact this has on the ways of relating.

A key element of an organisation or team that often goes unrecognised is its emotional state, or rather the emotional states of the people in the community.  As emotional states are so intrinsic to the human condition, any discussion about culture demands their inclusion.  The competing values framework allows u to identify the overarching ‘mood’ or ‘climate’ that is held within each culture type getting to the grass roots of what drives behaviour in the first place.

Through dialogue and conversation, the Competing Values Framework can be used to identify the desired culture or context that the organisation wishes to create together with the typical values, habits and behaviours against which the organisation would like to be aligned.  This then provides the foundation or blueprint against which future practices and developmental activities can be structured.

As an integral part of my approach in working with organisations and teams, the competing values framework is an excellent tool to create context for discussion around habit creation and building more effective ways to communicate and relate within a specific context.  It also respectfully brings to the fore, the subconscious issues and behaviours for employee development which can be integrated into a leadership development programme.